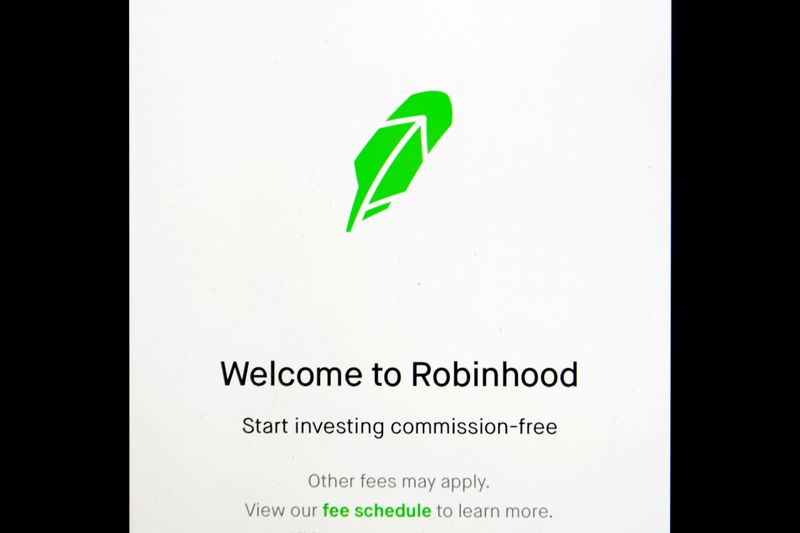 © Reuters. FILE PHOTO: The welcome screen for the Robinhood App is displayed on a screen

By Imani Moise and Medha Singh

(Reuters) – James Villalobos, a communications consultant for an insurance company in New York, downloaded the Robinhood online brokerage app back in September.

He was hesitant about getting involved in the stock market – “I never understood what it was, what it did” – but a few months later he created an account and bought shares in airlines and cruise lines, figuring the industries, slammed by COVID-19 disruptions, would eventually rebound.

He started watching YouTube videos about stocks, and joined a Facebook (NASDAQ:) group created by a friend who is “really into options trading.” Villalobos was quickly down $1,200. But he was ready to make his money back.

Last Monday, he put $551 into a clutch of shares that included BlackBerry (NYSE:) Ltd and AMC Entertainment (NYSE:) Holdings Inc, part of a group now known as “meme stocks” for their popularity on online forums like Reddit.

Tapping at an iPhone, Villalobos was playing his part in a surge of retail trading that unleashed chaos on the markets last week, sending big names on Wall Street scrambling, with U.S. hedge funds buying and selling more stock than they had in the previous decade, according to a Goldman Sachs (NYSE:) note on Friday.

That Villalobos is 25 years old should come as no surprise.

Apex Clearing, which helps facilitate trades for brokerages, said the nearly 6 million accounts it opened in 2020 represented a 137% increase from the year before. About 1 million of those belonged to Gen Z investors born in the late-1990s or younger, with an average age of 19.

Robinhood says the average age of the 13 million users on its platform is 31.

In interviews with more than a dozen digital brokerage users, Reuters found a younger generation that approaches trading much differently than the suits of Wall Street.

These are young women and men who feel comfortable on digital communities, whether monitoring threads on Reddit, following tips on Twitter or swapping ideas in Slack groups.

They are also coming up in a time of cheap, fast online trades, fed recently by cash from government stimulus programs and plenty of free time thanks to the COVID-19 pandemic.

Though most of those interviewed described themselves as “buy and hold” investors who generally avoid swing trading plays, they said they were open to the occasional gaming of speculative stocks.

“I look at it as essentially gambling. I don’t put more than I’m willing to lose,” said Will Callewaert, a 27-year-old Robinhood user who started trading during the coronavirus lockdowns.

J.J. Buckner, 29, who gives his views on stocks to 250,000 followers on YouTube, lost more than $7,000 on options for AMC, Blackberry (TSX:) and Nokia Oyj (HE:) on Thursday. But he told his viewers that he’s holding on, in the hope the rally will resume.

“It’s one for history books,” he told Reuters.

Part of what makes people like Buckner so confident is the power of the crowd.

“What we saw in Reddit this week was that you need a group to make it effective,” said Evan Keegan, 25, who does financial services public relations and has been trading on Robinhood for seven years. “You need to have enough people because the average retail investor isn’t moving the kind of money that the hedge funds are.”

It helps that retail investing today is so much easier than during the dot-com bubble of the late 90s, when traders had to pay higher transaction fees and purchase entire shares to get in on a stock, according to investment management experts.

Now, the advent of free trades and fractional shares allows investors to scale into investments without putting too much cash on the line at once.

Nisha Desai, chief executive at Andav Capital, a New York-based venture capital firm, said although these younger investors may not be following the rulebook, that doesn’t mean they can’t make money.

“If you can invest tomorrow and get out in two weeks who’s to say it’s not an efficient transaction or that it’s not a rational decision?” Desai said.

Villalobos earned $3,800 within hours of trading Blackberry and AMC options last week, but most of those gains evaporated when brokerages, including Robinhood, put restrictions on trading the stocks due to volatility.

After depositing money regularly into his Robinhood account, he said last week he was planning to take a break until the end of February.

“I told myself this week, ‘Chill, you’ve lost enough,'” he said.

But reached again on Monday, Villalobos said he’d changed his mind after reading chatter on the internet, and put another $510 on AMC options.

He was waiting to see what happens next.

2021-02-02
Previous Post: Is the trading in GameStop and AMC a major risk? Analysts weigh in
Next Post: Grayscale may jumpstart the next phase of the Bitcoin bull run tomorrow