Opinion: How Biden’s climate-change directives could wind up cooling real estate markets on the coasts 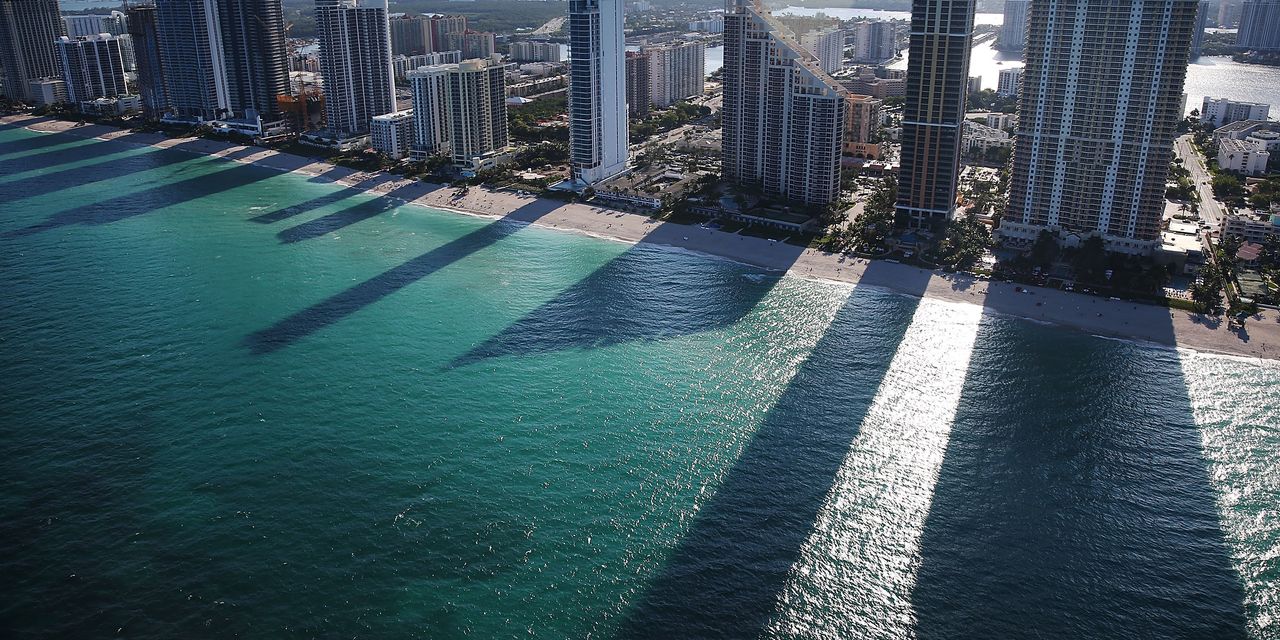 An executive order signed by President Biden could wind up cooling the real estate market in places where it’s been hot. Or at least appears to be. Why “appears”? I’ll get to that in a second.

The president ordered federal agencies to post scientific data and analysis on websites like those of the Environmental Protection Agency, National Oceanic and Atmospheric Administration and others. This and more, he argues, “will help to catalyze private sector investment into, and accelerate the advancement of America’s industrial capacity to supply, domestic clean energy, buildings, vehicles, and other necessary products and materials.”

What does this have to do with the real estate market?

You hear about so many people moving to Florida these days that you’d think the sheer weight of everyone would tilt the state, which barely sits above sea level, into the water. It’s a huge boom, two paragons of the truth — politicians and real estate developers — tell us.

One problem: It’s not accurate.

Yes, Florida grew last year, but at the slowest pace in nearly a decade, according to the state’s own “Demographic Estimating Conference.” The data are backed up by Atlas Van Lines, which says the number of people it moved into the Sunshine State in 2020 was the lowest in nine years — about 50% both inbound and outbound.

It takes a hardy soul to put up with Florida. The stifling heat and drenching humidity. Hurricanes are a worry for months each year. And Miami traffic is “a horrible hellscape of misery,” says the Miami Herald.

But, hey, there’s no income tax.

And the sea level I mentioned earlier? It’s unstoppable.

“The sea at the southern end of the Florida Peninsula has risen a foot since the 1900s, and almost 5 inches since 1993,” notes Mario Alejandro Ariza of Yale University, while other scientists say they could rise another six inches by 2030.

If you think this sounds like one giant infrastructure play, you’re right. Miami is spending big to hold off the inevitable — floodgates, raising structures above ground and more. The Herald says rising groundwater has already caused “dangerous (and gross) septic failures across Miami-Dade County, a problem that cost $3 billion to solve in Miami-Dade alone.” In the meantime, building codes aren’t keeping up.

It’s hardly just Florida. Threatened cities everywhere are raising taxes, issuing bonds, hiking water bills and more to cope. That’s if states and municipalities can even acknowledge there’s a problem. It hasn’t helped, for example, that lawmakers — and it’s objective to note that they all seem to be Republicans — have downplayed these sorts of problems in recent years.

When Rick Scott was governor of Florida (he’s now a U.S. Senator), he was accused of banning phrases like “climate change” and “global warming.” Former Pennsylvania Gov. Tom Corbett was accused of the same thing, and in 2012 North Carolina’s GOP-controlled state legislature passed a law banning the state from considering climate science in any projection of future sea levels. (That has since been changed.)

This denialism peaked during the presidency of Donald Trump, when federal departments like the EPA scrubbed websites of data and analysis that didn’t mesh with the president’s views that climate change is “mythical,” “nonexistent” or “an expensive hoax” — though in fairness he later claimed it was a “serious subject” that is “very important to me”.

Even so, data that vanished from federal websites in the early stages of his presidency generally was never replaced.

There was one federal agency Trump couldn’t control as well, however, the biggest one of all:  the Department of Defense. Ask the generals and admirals in the Pentagon what the biggest threats to U.S. national security are and they’ll reel off the usual things. China. Russia. North Korea. Cyber hacking, to name but four. But right up there, near the very top they add another: Global warming.

A typical line, from 2003, says climate change “should be elevated beyond a scientific debate to a U.S. national security concern.” Rising temperatures and sea levels, the studies forecast, translate into everything from famine and mass migration (e.g., Syria’s decade-long civil war) to “potential impacts to Department of Defense missions, operational plans, and installations.”

There were similar reports during Trump’s presidency. Here’s one that notes regular and increasing flooding at Hampton Roads, Va., home to America’s biggest U.S. Navy base, and problems at other critical installations around the country.

“It is important that climate change impacts not be treated as just an environmental challenge,” the report says, but as something that can affect national security strategy itself.

Trump was skeptical. “I don’t believe it,” he once said of such Pentagon analysis.

But Biden does. So here’s a prediction: One reason coastal development has continued to boom is because business risk is often mispriced and transferred to other taxpayers, who fork over billions for things like FEMA’s National Flood Insurance Program.

You might live in the Rocky Mountains but subsidize insurance for someone to live on North Carolina’s rapidly eroding Outer Banks, for example. This won’t go on much longer.

On Sunday, a North Carolina newspaper said that “[b]ig flood insurance rate changes are coming,” and that it’ll be a blow to the climate change denier crowd. On Monday, a report in an insurance industry publication, “Claims Journal,” said: “Floridians are underpaying for flood insurance.”

As risk is repriced in coastal markets — pricing is also becoming far more granular because the data are better — developers and buyers will begin to modify their thinking. Banks may charge more for loans. Insurance premiums will rise.

Let’s go back to southern Florida. For every hedge fund big shot, pro athlete and movie star we read about moving in, there are thousands of people living in less affluent areas who have most of their savings tied up in modest homes.

They face, says Yale’s Ariza, “the prospect of generations of wealth being wiped out when the property market inevitably craters in the face of rising seas.”

There won’t be anybody to sell to and they’ll be left not high and dry, but under water, in more ways than one.