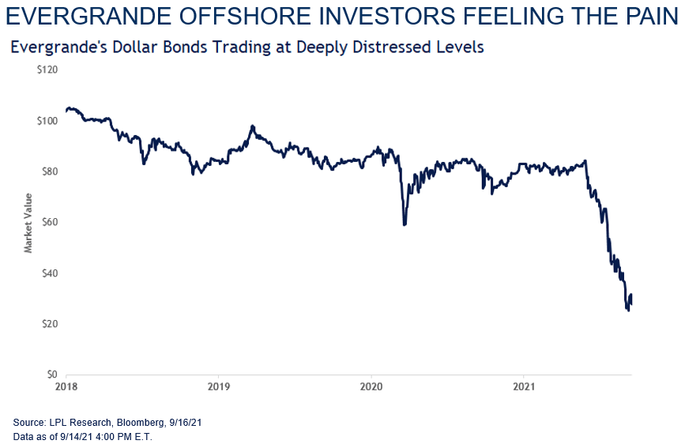 Evergrande, a Chinese property giant nursing more than $300 billion in debt, remains on the brink of default — sending global equities tumbling Monday as investors, who had previously ignored the situation, sat up and took notice.

Fears of a bursting property bubble have long been a concern for investors when it comes to China. A heavily leveraged real-estate sector makes up more than 28% of China’s economy, according to the Financial Times. Questions surround how willing Chinese authorities will be to provide a backstop.

Meanwhile, holders of Evergrande’s approximately $19 billion in dollar-denominated bonds are left to wonder what will become of their investments, while other investors attempt to gauge the potential spillover effects a collapse could have on China’s property sector and global financial markets.

Evergrande faces an $83.5 million interest payment Sept. 23 on its March 2-22 bonds and a $42.5 million payment on Sept. 29 on its March 2024 notes, according to news reports. Failure to settle those payments within 30 days of their due date would put Evergrande in default.

FitchRatings, a credit ratings firm, on Sept. 7 downgraded Evergrande’s rating to CC from CCC+, indicating they saw some sort of default as probable. Evergrande is one of China’s top three property developers, although the residential housing market is highly fragmented, Fitch analysts noted in a Sept. 14 report. Evergrande debt has seen a series of downgrades from all three major ratings firms.

Through the end of last week, investors had noted the lack of reaction beyond China’s property sector to Evergrande’s woes. That changed Monday, when those worries were blamed for wobbles in global equities and across financial markets.

Treasury yields fell, with the rate on the 10-year Treasury note
TMUBMUSD10Y,
1.305%
down nearly 7 basis points as investors appeared to snap up safe-haven assets. Yields fall as debt prices rise. The dollar rose against major rivals.

Evergrande’s market share in 2020 was only around 4%. Fitch said the risk of significant pressure on house prices in the event of a default would be low, unless the restructuring or liquidation of its assets becomes disorderly. “Fitch believes this is something the authorities will want to avoid,” the analysts wrote.

But faith in that scenario may have been shaken after Reuters reported last week that the editor of the state-backed Global Times newspaper had warned that Evergrande shouldn’t assume it’s “too big to fail.”

S&P Global Ratings on Monday said a default by Evergrande would cause more than mere ripples in financial markets, but would be unlikely to lead to a tidal wave of defaults.

Analysts at UBS, led by Kamil Amin, said in a Thursday note that the potential for market spillovers will depend on whether Evergrande restructures or fully liquidates. The analysts wrote what they remained confident that a restructuring remained the most probable outcome.

“In the event of a restructuring, we expect the bonds to bounce off their lows and contagion to be broadly limited,” they said.

But in the event of liquidation, there would likely be a “high degree of contagion,” they warned. The spillovers would occur, they said, through three channels:

There “really isn’t global contagion risk with Evergrande because in the end, and as far as we know, the loans to Evergrande were made by Chinese banks that are implicitly backstopped by the Chinese government, and the Chinese government’s balance sheet can easily handle the Evergrande losses which are valued around $303 billion of liabilities,” said Tom Essaye, founder of Sevens Report Research, in a Friday note.

Analysts emphasized that not all of the volatility seen in stocks or other financial markets on Monday is due to Evergrande worries. Investors are also focused on this week’s meeting of Federal Reserve policy makers, and are also growing increasingly nervous about a debt-ceiling showdown between congressional Democrats and Republicans.

Check out: Evergrande isn’t the only reason the stock market is headed for its worst day in 2 months. Here are 5 other reasons

As for market exposure to Evergrande, many analysts remain sanguine, though holders of dollar bonds are likely in for some pain.

Dollar bonds “will likely get restructured, but most of the debt is in global mutual funds, ETFs, and some Chinese companies and not banks or other important financial institutions,” said Ryan Detrick, chief market strategist at LPL Financial, in a note (see chart below).

Although the impact from Evergrande’s liquidity crisis is enormous, the good news is the fallout hasn’t started to spillover to money markets, Detrick said.

“Short-term funding markets are acting just fine in China thus far; remember, it was the money markets in the U.S. that first started to show cracks in the system in early 2008, well before the wheels fell off.”

The UBS analysts, meanwhile, noted that Evergrande makes up around 10% of the Chinese high-yield offshore market, while other closely correlated B-rated credits make up another 8%. It’s weakness in those credits that could drive broader contagion, they said.

The most important thing for investors to watch in coming weeks and months will be coupon payments on Evergrande’s offshore bonds, the UBS analysts said, warning that they would be the most likely trigger for a default.

As for market volatility, reassurances that exposure is contained may not offer a lot of comfort, at least in the near term, said David Bahnsen, chief investment officer at The Bahnsen Group, a Newport Beach, Calif.-based wealth management firm.