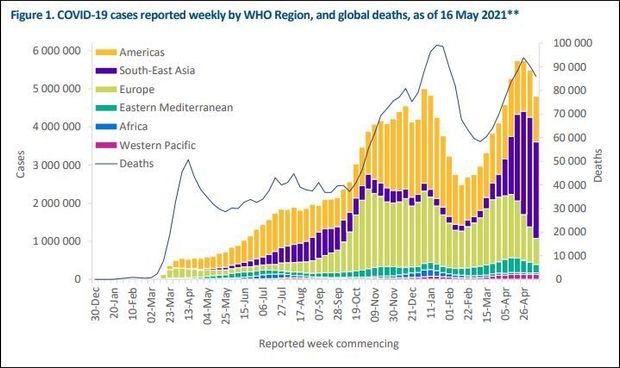 The uneven state of the pandemic across the world was on full display Wednesday, with India setting a global record for one-day fatalities, while the U.S. reported continued declines in cases and deaths and the European Union said it would open its borders to vaccinated travelers after months of restrictions.

The divergent state of affairs highlights the extent to which wealthier countries have snapped up vaccines for their own populations and left poorer countries behind, a move that has been repeatedly criticized by health experts.

“The pandemic is a long way from over, and it will not be over anywhere until it’s over everywhere,” said World Health Organization Director-General Dr. Tedros Adhanom Ghebreyesus earlier this week.

The WHO said the number of new cases and deaths across the world continued to fall in the week through May 16 but remained at undesirably high levels with just over 4.8 million new cases and just under 86,000 new deaths, down 12% and 5%, respectively, from the previous week.

All regions reported declining case numbers except the Western Pacific region, where cases were flat, the WHO said in its weekly epidemiological update. Europe reported the biggest decline in cases, followed by the eastern Mediterranean.

Those regions also reported the biggest decline in fatalities. But Southeast Asia and the Western Pacific had roughly the same number of deaths. India had the highest number of new cases, followed by Brazil, the U.S., Argentina and Colombia.

The crisis in India continues with the nation of almost 1.4 billion recording 4,529 deaths in a single day on Tuesday, according to official figures. That’s the most in a single day for any country since the start of the outbreak and is still likely vastly understated, given a shortage of testing and the overall stress on India’s healthcare system. The previous one-day record was the 4,468 deaths counted in the U.S. in January.

Other Asian countries that were praised for their apparent success in containing the spread of the virus earlier in the pandemic are now seeing fresh case surges, and some are being forced to reimpose restrictions.

Taiwan has recorded more than 1,000 new cases since last week, as the Associated Press reported, and has put more than 600,000 people in two-week medical isolation.

See: COVID-19 pandemic was a ‘preventable disaster,’ made worse by a lack of global coordination and dithering, independent panel finds

The surge is being driven by the more easily transmissible variant first identified in the U.K., according to Chen Chien-jen, an epidemiologist and the island’s former vice president, who led the highly praised pandemic response last year.

Senior citizens who frequent slightly racy “tea salons” in Taipei’s Wanhua neighborhood are another contributing factor, said the AP. They accounted for about 375 of the new cases as of Tuesday, Chen said. The tea shops are known for providing adult entertainment with singing and dancing.

Singapore has imposed stringent social distancing measures until June 13, restricting public gatherings to two people and banning dine-in service at restaurants. That’s after the number of infections of untraceable origin rose to 48 in the past week, from 10 cases the week before.

Neighboring Malaysia set a record of 6,075 new cases on Wednesday, according to its health ministry. The previous record was 5,728 on Jan. 30, according to The Straits Times.

Thailand reported 35 deaths, the highest since the outbreak started, on Tuesday, and an additional 29 on Wednesday. That brought its number of fatalities to 678, of which 584 have been reported in the latest wave. About three-quarters of Thailand’s more than 116,000 cases have been recorded since the beginning of April. Thailand had about 7,100 cases in all of last year in what was regarded as a success story, the AP reported.

Europe, meanwhile, is set to reopen to fully vaccinated people and will increase the level of new cases a country has to be recording to be deemed unsafe. France opened café terraces on Wednesday, along with museums, cinemas and theaters.

In the U.S., New York officially reopens on Wednesday, with businesses allowed to return to full capacity and vaccinated people no longer have to wear face masks indoors or outdoors, unless individual companies require them.

Read: New York sees a rush of reopenings, including the end of the indoor mask mandate

See now: Putting on outdoor Shakespeare shows in New York City parks this summer is not a breeze

The Centers for Disease Control and Prevention’s vaccine tracker is showing that as of 6 a.m. Eastern time on Tuesday, 158.4 million people, or 47.7% of the population, had received at least one vaccine dose.

Among Americans 65 and older, 39.8 million people are fully vaccinated, equal to 72.8% of that group. More than 46 million people in that age bracket have received a first jab, covering 84.6% of that population.

A Word from the Experts: Rick Bright wants to wipe out this virus — but it’s going to take better COVID-19 vaccines, distributed to 70% of the world’s population

• A top White House adviser for the coronavirus is encouraging young people to get vaccinated, sharing his son’s struggles after contracting COVID-19, the AP reported. Andy Slavitt revealed during a White House briefing Tuesday that one of his sons was diagnosed with the virus late last year and still suffers from lingering side effects. Slavitt, who served as a health adviser in the Obama administration after being brought in to pilot a turnaround of the Affordable Care Act sign-up mechanism, appealed to younger Americans to roll up their sleeves, even if they feel they’re at less risk than older Americans for serious medical consequences. Slavitt said his teenage son was “young and fit and in the prime of his life. But six months later, he still suffers from tachycardia, shortness of breath, and ongoing and frequent flu-like symptoms. His hands are cold to the touch.”

• Two of Britain’s biggest pub operators on Wednesday reported bigger half-yearly losses, as the COVID-19 pandemic and related lockdowns forced the temporary closure of their estates, MarketWatch’s Lina Saigol reported. But both Mitchells & Butlers and Marston’s said they were confident profits will rebound, as the gradual easing of COVID-19 restrictions encourages more people to return to their venues after months of being stuck at home. Pubs and restaurants in England opened for outside dining and drinking in April, but they have only been able to serve customers indoors since May 17, when the country entered the third stage of Prime Minister Boris Johnson’s “road map” out of lockdown.

• Malawi has burned nearly 20,000 doses of expired AstraZeneca vaccine, defying calls not to do so from the World Health Organization and the Africa Centers for Disease Control and Prevention, ABC News reported. Malawi’s health minister, Khumbize Kandodo Chiponda, presided over the incineration Wednesday at Kamuzu Central Hospital in the capital Lilongwe. She said the burning of the vaccines will prevent those with a negative perception of inoculations from using the excuse of expired vaccines from getting the shots. Malawians were reluctant to get the AstraZeneca shot because of its links to a rare blood-clotting disorder.

• Pfizer will start making its COVID-19 vaccine in Ireland after investing $40 million in a center that is expected to create 75 jobs, the Guardian reported. The plant is to be brought online by year-end. Ireland has vaccinated 10.4% of its population of 4.9 million, according to Johns Hopkins University data.

• Americans are “misinterpreting” the CDC’s new mask guidance, which lets vaccinated individuals forego masks indoors, according to an Axios report, citing Dr. Anthony Fauci, head of the National Institute of Allergy and Infectious Diseases and President Joe Biden’s chief medical officer. At a virtual event, Fauci said the new rules are not tantamount to a removal of the mask mandate for everyone. “It’s an assurance to those who are vaccinated that they can feel safe, be they outdoors or indoors,” he said. The CDC guidance released last week has confounded some Americans, as many businesses will still require face masks indoors.

The global tally for the coronavirus-borne illness climbed above 164.3 million on Wednesday, according to data aggregated by Johns Hopkins University, while the death toll rose topped 3.4 million.

The U.K. has had 4.5 million cases and 127,953 deaths, the fifth highest in the world and most of any country in Europe.

China, where the virus was first discovered late in 2019, has had 102,783 confirmed cases and 4,846 deaths, according to its official numbers, which are widely held to be massively underreported.

There were no economic data releases on Wednesday. The Dow Jones Industrial Average
DJIA,
-0.66%
and S&P 500
SPX,
-0.51%
were sharply lower ahead of the release of minutes from the Federal Reserve’s April monetary-policy meeting.