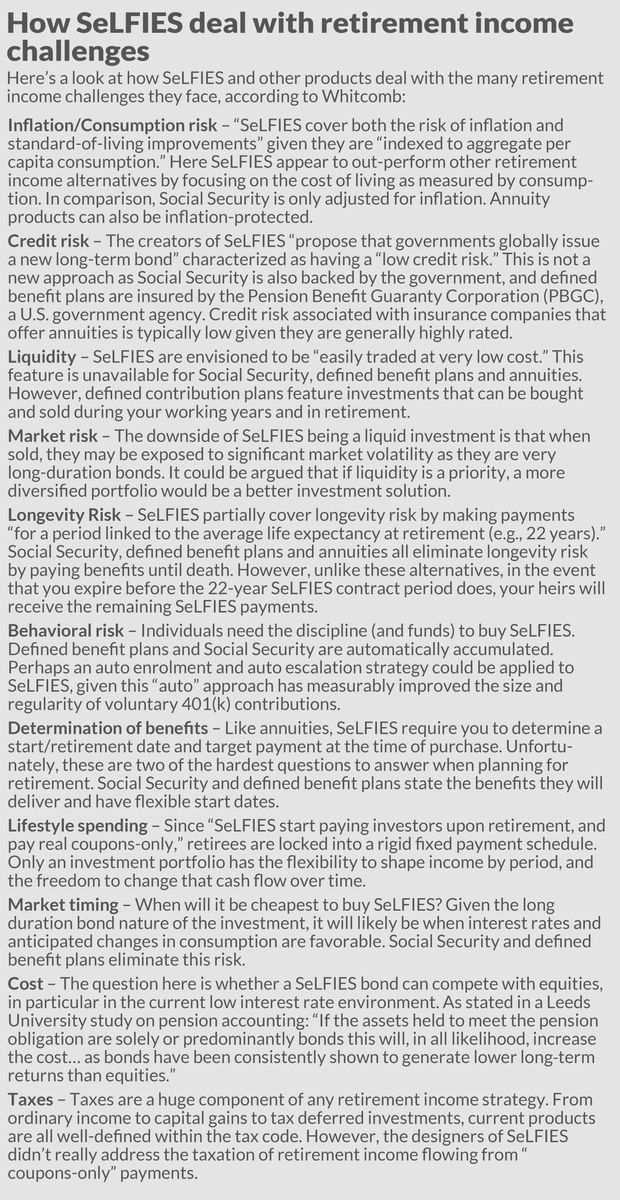 On paper, it checks all the boxes.

It provides a defined amount of income in retirement that’s adjusted to a standard-of-living index.

You get to contribute as much or as little as you want toward your retirement nest egg.

And there’s liquidity and transparency.

The creators of SeLFIES — Robert Merton, a distinguished professor of finance at the Massachusetts Institute of Technology Sloan School of Management and winner of the Alfred Nobel Memorial Prize in Economic Sciences in 1997, and Arun Muralidhar, the chairman of AlphaEngine Global Investment Solutions and an adjunct professor at George Washington University — are still working tirelessly to make their idea become a reality.

Unfortunately, there have been no takers — or at least not yet. But there are plenty of experts who praise the effort.

“Finding more efficient and effective methods to generate retirement income is an ongoing quest,” said Keith Whitcomb, the director of analytics at Perspective Partners. “And the creation of SeLFIES is a noble attempt to meld the positive qualities of Social Security, defined benefit, and defined contribution plans in a way that will improve the overall population’s funding for retirement.”

In an interview, Muralidhar discussed all that and then some.

What’s really interesting about SeLFIES is how its feature set improves upon the best of what’s already available in the marketplace of retirement-income investments and products.

Think of it as the best, and then some, of Social Security, a defined-benefit plan, a defined-contribution plan, a zero-coupon bond, a Treasury Inflation-Protected Security (TIPS) and a deferred-income annuity.

Like a defined contribution, you get to contribute as much or as little as you want toward your retirement nest egg and your heirs inherit the SeLFIES if you die before the securities mature.

The idea of SeLFIES can be traced back more than 40 years, when Merton first turned his attention to improving retirement security, according to Muralidhar. In 1984, Merton introduced the idea of government-issued consumption-linked bonds, and in 2007, he argued that the welfare of individuals should be expressed in units of retirement income and not wealth, as is done in defined-contribution plans.

In 2014, Muralidhar and others developed the Relative Asset Pricing Model (RAPM), which leveraged Merton’s idea that in retirement planning investors care about the “funded” status of their retirement (wealth divided by randomly determined liabilities).

Then in 2015, Muralidhar and others devised a new bond that replicates the desired cash flow profile in defined-contribution plans — a bond (called Bonds for Financial Security or BFFS) that pays a fixed currency coupon, in real terms, that starts paying once an individual retires for a period equal to the life expectancy of the average person in a particular country.)

And then, in a 2017 paper, Merton and Muralidhar joined forces, linking the BFFS to per capita consumption and, thus, SeLFIES were born.

Muralidhar also credits the creation of SeLFIES to a consulting project where he and others were helping California and other states investigate automatic IRA programs.

”As we were reviewing other defined-contribution plans around not only the country, but around the world, one of the things that struck me was that the solution seems slightly incomplete,” he said. “In a defined-benefit plan, you’re guaranteed a stream of income. In a defined-contribution plan, there’s no sort of clear sense of how do you lock in retirement income without buying annuities.”

Over time, he realized that “the safe asset in defined-contribution plans just didn’t exist.” That being an instrument that pays you nothing during your working years and then pays you a steady stream of income during your retirement years.”

Governments and investors win — who loses?

“In essence, I see SeLFIES as a win/win/win idea,” said Paula Hogan, a private wealth manager with Creative Planning, and co-author with Muralidhar of a paper about SeLFIES. “I want to buy some as soon as they do come out.”

Individual investors will have an appropriate retirement income product that is easy to understand and to buy, and that can be purchased in small units each year so that over time a standard-of-living indexed income in retirement is secured to the extent each individual desires, she said. “Some investors will cover just their base expenses,” said Hogan. “Others will aim to cover all expenses.”

The government will get money now. “If they use the proceeds to build or repair infrastructure, there will presumably be various income streams to help pay bond payments in the future,” said Hogan.

And for us there’s this: “With SeLFIES offered in a free, transparent market, investors will be able to discern the true cost of financing a secure retirement,” said Hogan. “Then, people can plan well for themselves; they will know how much they have to save. The industry can use that pricing to build other products that might be of value to clients. SeLFIES could also ease the confusion/policy differences regarding 401(k) rules by offering, from the employer’s perspective, a liability-free default option.”

A multitude of problems solved

SeLFIES solve many of the problems that retirees face, said Michael Finke, a professor of wealth management at the American College of Financial Services.

For one, SeLFIES, unlike 401(k) accounts, give workers clarity about how much they can safely spend from their savings in retirement, he said.

Plus, SeLFIES could help address a concern 401(k) investors have: translating their wealth into retirement income, Muralidhar said. The Labor Department is also working on that. Starting August 2021, 401(k) plan sponsors will be required to annually disclose to plan participants estimates on how much income their account balance would produce if used to purchase an annuity.

But if the Labor Department were to classify SeLFIES as a qualified default investment alternative (QDIA), a plan participant would know exactly how much income in retirement they would receive.

SeLFIES also address the worries that come when account balances in a 401(k) or IRA fall in value. If investors had a locked-in income strategy they wouldn’t worry as much when the stock market falls, said Muralidhar.

According to Finke, SeLFIES are comparable to buying additional inflation-protected Social Security income with the added benefit of being able to pass on savings to heirs, tap the assets for liquidity, or turn into a lifetime annuity.”

To be fair, SeLFIES have some drawbacks.

“The financial industry will lobby against them,” Hogan said. “SeLFIES would — will — disrupt the advisory market and the brokerage market but fit perfectly with the policy trend of increasing support for lifetime income products.”

And it will be a communication challenge to induce investors to trust a standard-of-living contract. “Such contracts are unusual for the typical investor and at the moment trust in the government is low,” she said.

SeLFIES also force a level spending path in retirement, said Finke. “Inflation protection is quite valuable, but most retirees spend more early in retirement — and I find that they get more satisfaction from spending early rather than late in retirement when they have more physical limitations.” (Finke’s solution to that drawback: Design a downward sloping spending path that included SeLFIES and other assets.)

Designing a one-size-fits-all 20-year fixed spending period doesn’t reflect the wide differences in longevity by income in the United States, said Finke. “A high income healthy woman may have an expected longevity of 25 years at the age of 65, which means that the SeLFIES won’t last until her average longevity and won’t be able to buy an annuity that replaces the same income,” he said. “On the other hand, an average blue-collar male worker is expected to live fewer than 20 years after the age of 65. He will likely pass on more of his SeLFIES wealth instead of spending it in retirement.”

And then there’s this; “We’re living in a time where the price of government inflation-protected bonds is comically expensive,” said Finke.

For instance, the TIPS yield as of this writing is -1.72%. “That means that I can buy $917 of real spending in five years with $1,000 of savings today,” said Finke. “Although this is reality and giving workers a clearer idea of how expensive it is to buy real income in the future is valuable, it is hard to imagine that many workers would be excited about the prospect of locking themselves into reduced future purchasing power.”

And there are issues with respect to behavior and mechanics. “Given the long-bond nature of the SeLFIES, purchasing increments of the bond over an entire working career would likely be difficult,” he said. “Pricing the investment would have to account for the equivalent of a 40-, 50- or even 60-year bond, with payments beginning decades in the future. This would make ‘price discovery’ and a truly liquid marketplace in which to trade the bonds a significant obstacle to overcome.”

And still they persist

Despite those drawbacks, Muralidhar, Merton and others are trying to persuade governments around the world to issue SeLFIES. Over the past four years, they’ve met with U.S. Treasury Department officials as well as their counterparts in other parts of the world, including South America, Asia, and Latin America.

“The beauty of this idea is it’s not restricted to any one country,” Muralidhar said. “It’s a global solution. The exact same design idea applies globally. And each country can tweak it to its own market situation.”

But while no country is planning to issue SeLFIES in the near term, Muralidhar thinks the timing, if not right now, will soon be. For instance, he noted Treasury Secretary Janet Yellen is discussing the possibility of issuing 50-year U.S. Treasurys.

“Our thinking would be, if you’re planning to do long-term instruments like that, why not issue a bond that could be extremely helpful for retirement and that could potentially be used to fund infrastructure,” said Muralidhar. “Such bonds can achieve not only the funding of infrastructure, which are long-term in nature, but at the same time address a major fault in retirement security, which is the absence of the safe instrument and defined contribution plans.”

Ultimately, however, people in the Treasurys (or Treasuries) or the ministries of finance will need to step up to create SeLFIES.

2021-03-17
Previous Post: Dollar Edges Higher Ahead of Fed Statement By Investing.com
Next Post: Dormant altcoins are coming back to life

×
This site uses cookies which may contain tracking information about visitors. By continuing to browse this site you agree to our use of cookies. Disclosure: Content on this website, including reviews, may not be neutral or independent and reflects the author's views. Find out more.